I Don’t Belong in Miami Beach

When I first imagined Miami Beach, I thought of palm trees, pastel-colored hotels, funky cafes, and a miles of sandy beach. I imagined a fun place in which to relax and do nothing for a couple of days. Miami Beach it turns out is not that kind of place. And while it is true that Miami Beach has all of the nice things I thought it would, I found it nearly impossible to enjoy them.

I have never felt more out of place and after a couple of days, I couldn’t wait to get the hell out. Here are a few reasons why I don’t think I belong in Miami Beach:

I like people and big crowds don’t bother me so much, but Miami beach is in a class all its own. The traffic, congestion, and overall volume of people occupying such a small island was insane. There was no room of breathe and instead of feeling relaxed like I normally do at the beach, I was stressed out and worried about getting trampled or run over.

I don’t think the big crowds would have bothered me so much either, had the people been more considerate. There are no “please” and “thank-you’s” in Miami beach. People were either utterly oblivious and believed that the entire beach belonged to them, or they seemed to have ”fuck off” written all over their faces. It was unfortunate and had I not been with Luke, I would have been incredibly lonely.

The entire time I was in Miami beach, I felt like I was living in an MTV nightmare. The people, the atmosphere, the commercialism… all of it seemed fake and I think that’s what bothered me the most. It was an empty bubble, filled with the allusion of “fun” for too high a price.

There was however, one thing about Miami beach I liked. The Art Deco hotels. But even with their minor historical significance, they were empty too. Just a pretty facade to look at, nothing more.

I would like to give Miami Beach a second chance someday, but I don’t think it will be anytime soon. 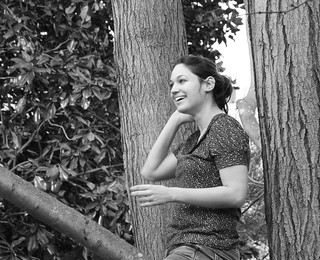 Hello and welcome! I'm Sarah, an art teacher in my mid-twenties who loves to travel and experience new things. I am inspired by art, the ocean, interesting landscapes, and the even more interesting people who call this planet home. I currently reside in North Carolina but am a proud Canadian. Wake Up Mona is the story of my travel experiences, both near and far. Read More